Growth In Digital As A Result of Covid

Adobe’s Digital Economy Index shared that e-commerce in the United States jumped 49% during the month of April.  This year’s Adobe’s Digital Economy Index analyzed more than one trillion online transactions and 100 million different SKUs. The data that they found concluded that consumers are willing to spend more on products that will help them during this time. Consumers shared that they are willing to spend more online for things like online grocery pickup and delivery.  Adobe has predicted that since online sales have increased, online prices will continue to rise at a higher pace.  Americans are used to finding more deals and cheaper pricing online, however, that will most likely change.

Online grocers have helped with the overall increase in sales.  Grocery stores that are online have experienced a 110% increase in daily sales between March and April. Companies like Amazon, Walmart, and Instacart have had to hire more workers to help with meeting customer demands.

Electronic sales were up 58% this past month. Computer prices slightly went up in April because of rising demands. In addition, the sales of other electronic equipment like audio mixers, microphones, microphone cables and other audio equipment jumped 459% in April.  These types of equipment are normally used by podcasters and music producers to create at home studios.

Since consumers have turned online to shop, the apparel industry had an 34% increase in sales throughout the month of April. Since no one has the need to get dressed up for work or other events, retailers saw the largest monthly drop in apparel sales in more than five years. In April, retailers saw increases in sales for apparel like pajamas and decreases in sales for business apparel.  Pajamas sales were up 143% while  business apparel-like pants were down 13% and jackets were down 33%.

In the first quarter, Walmart’s e-commerce sales grew 74%. E-commerce and store sales increased greatly for items like groceries and bicycles during the pandemic. The company’s average ticket price increased about 16%. Large retailer, Target’s, digital sales grew more than 100% in March and grew up to 275% in April.  Lastly, Amazon, the largest retailer, had sales increase 26% this past quarter.  CEO and founder, Jeff Bezos, shared his plan to put $4 billion of their sales this quarter towards things such as new data centers and employee safety. Bezos believes that these improvements will negatively impact sales this quarter, but will help sales in the long run. 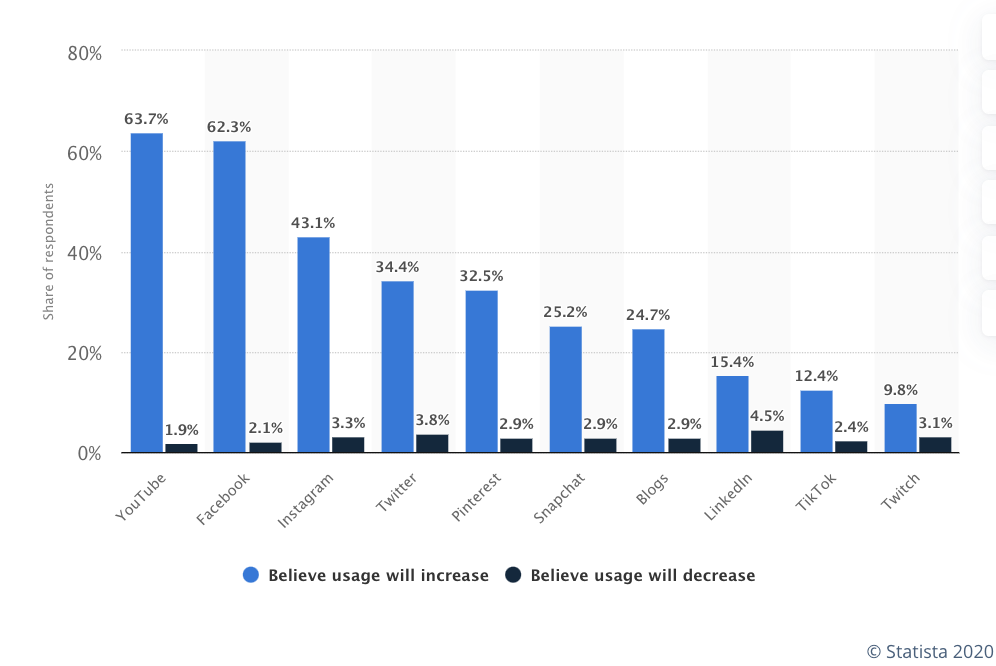 According to MarketWatch Facebook is experiencing record usage of its platform by users.  A great amount of the users that are using Facebook during this time are actually small businesses that are relying on the platform to help advertise their business.  Facebook shared that they have seen a 50% increase usage of their messaging products and have counted about 700 million calls being placed through their Messenger and WhatsApp daily.

Instagram has noticed that the time spent on their app is estimated to go up about 14% throughout this year.  The increased 14% of usage time means that users are spending about 3 extra minutes a day on their app. In addition to Instagram, Snapchat is expected to have about a 12% growth of time spent on their app.  The total amount of time users spend on Snapchat daily will come to a little less than 30 minutes a day by the end of this year. Lastly, Twitter has seen great growth in their daily users since the beginning of covid.

For the month of April, public hosting companies experienced gains in the stock market.  In fact, GoDaddy is now back in the positive territory for 2020. GoDaddy, a large domain & hosting company, has provided their users with tools and tips on how to help get their small business through state lockdowns.

In April 2020, a survey gathered that 10,000 computers and 2.9 million domains have entered the web world.  However, during this time there was also a loss of 16.9 million sites.  Currently, Apache servers have the largest share of sites and also has the most active sites and web-facing computers.

At the end of March 2020, Transparency Market Research predicted that the video conferencing software market should double in the next seven years.  In 2019, the market was worth $6.1 billion and should be worth an estimated $11.56 billion by the end of 2027.  A research analyst from Report Ocean shared that in March there were 62 million individuals around the world that downloaded video conferencing software on their smart devices.

It has been found that people send 20% more time using apps now compared to the time they spent on them in 2019. Individuals all over the world together spent about $23 billion in app stores. Video conferencing apps are experiencing the most growth in downloads and uses while travel and hospitality apps are noticing a 12% decline in downloads.  Social media usage jumped from being 20% of total mobile app usage to 25% in March.